"Winner of numerous awards in the wildfowl carving field, Finch has exhibited in the New Orleans Museum Museum of Art, the Dallas Museum of Natural History, the Leigh-Yawkey Woodson Art Museum in Wasau Wisconsin, the New Britain Museum of American Art, New Britain, CT., and at the Easton Waterfowl Festival, Easton Maryland. He is a six-time Gulf South Champion and has won Best of Show Honors in Open, Best in Masters', three times, and has placed in the top three Best in World Level four times." 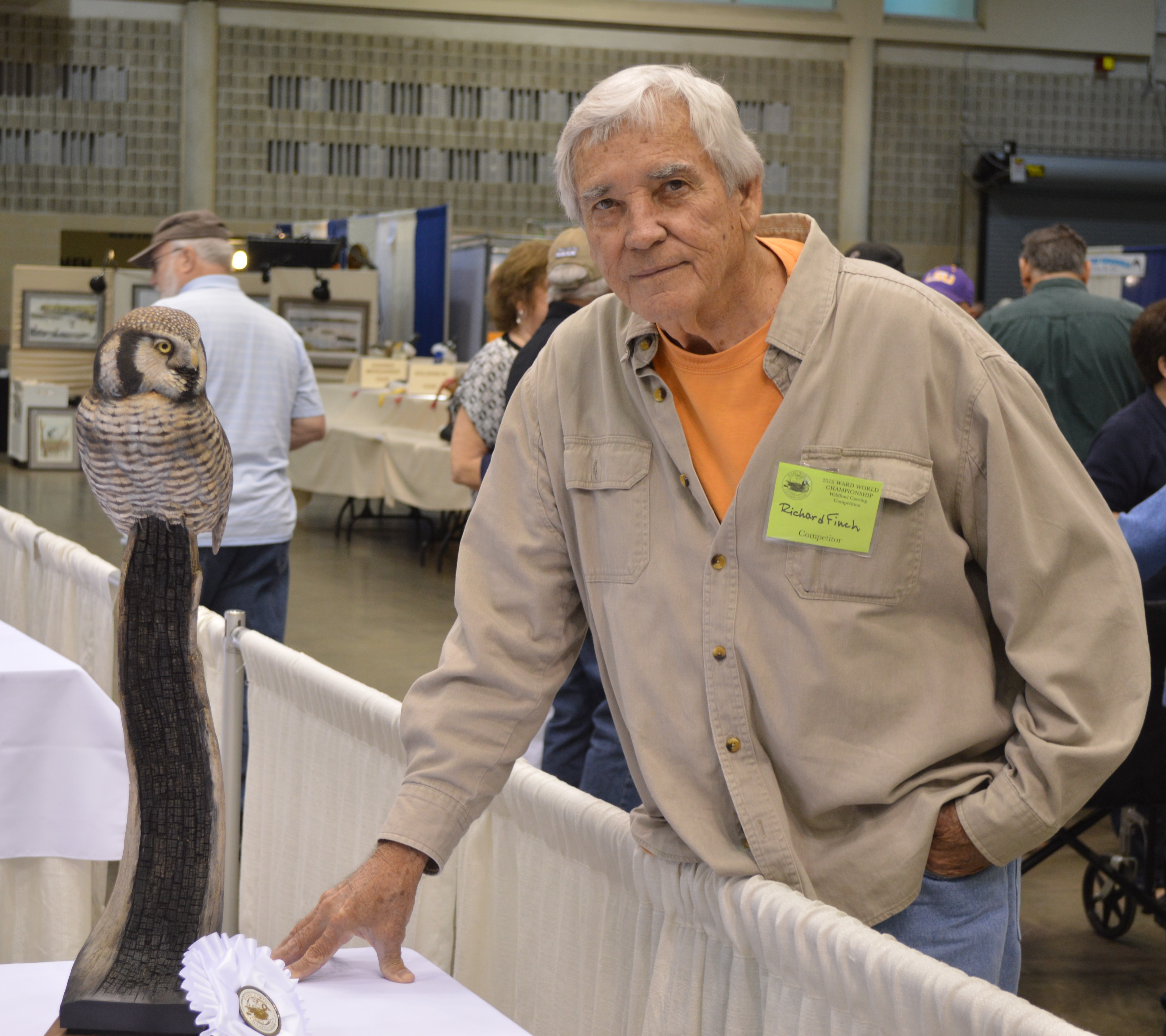 Above is Richard Finch at the 2016 Ward Foundation World Championship in Maryland.

His Hawkowl won third place in Decorative lifesize in the "world level" This is the fourth time Richard has won at the highest level of competition at the Ward show. 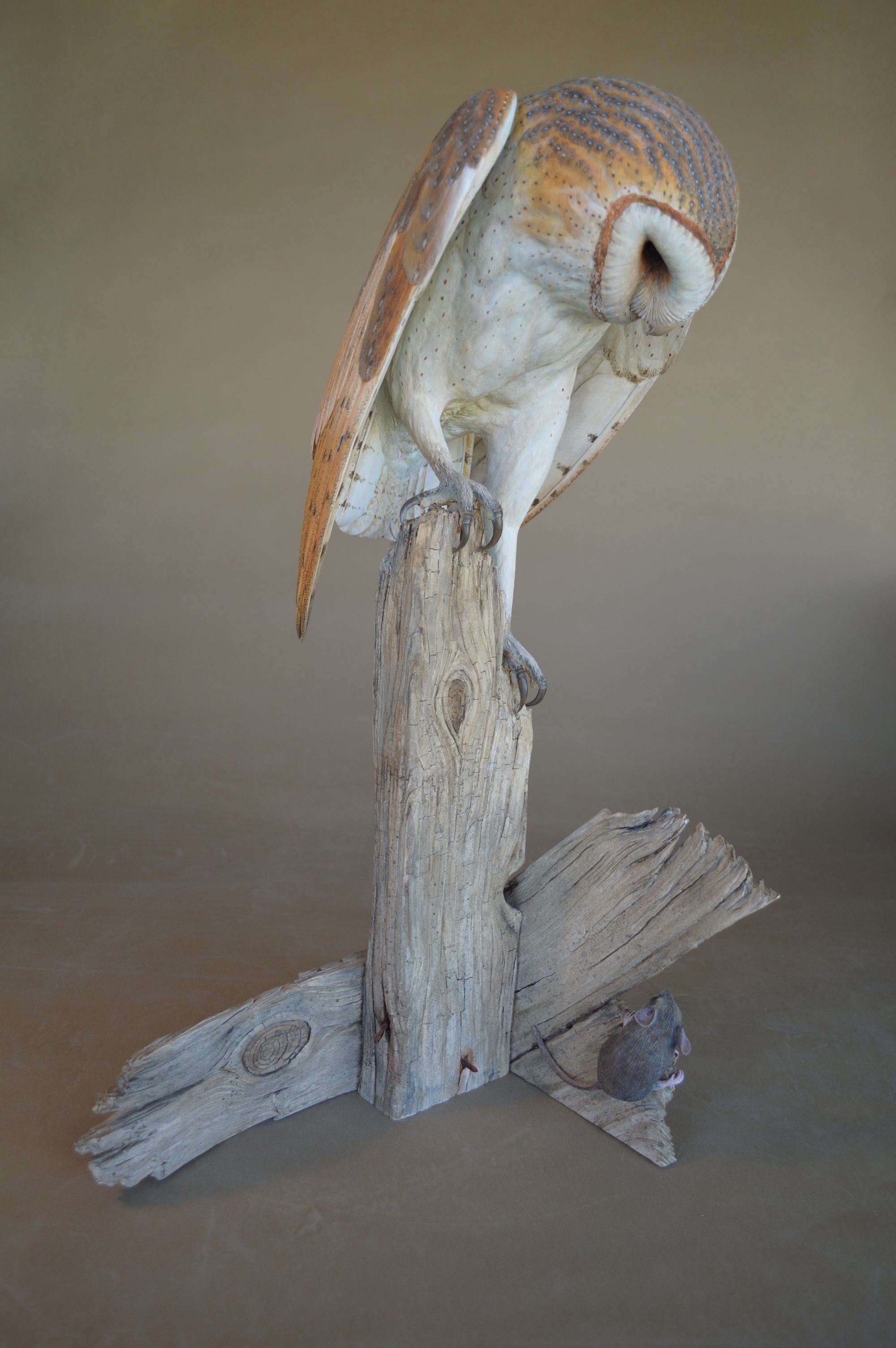 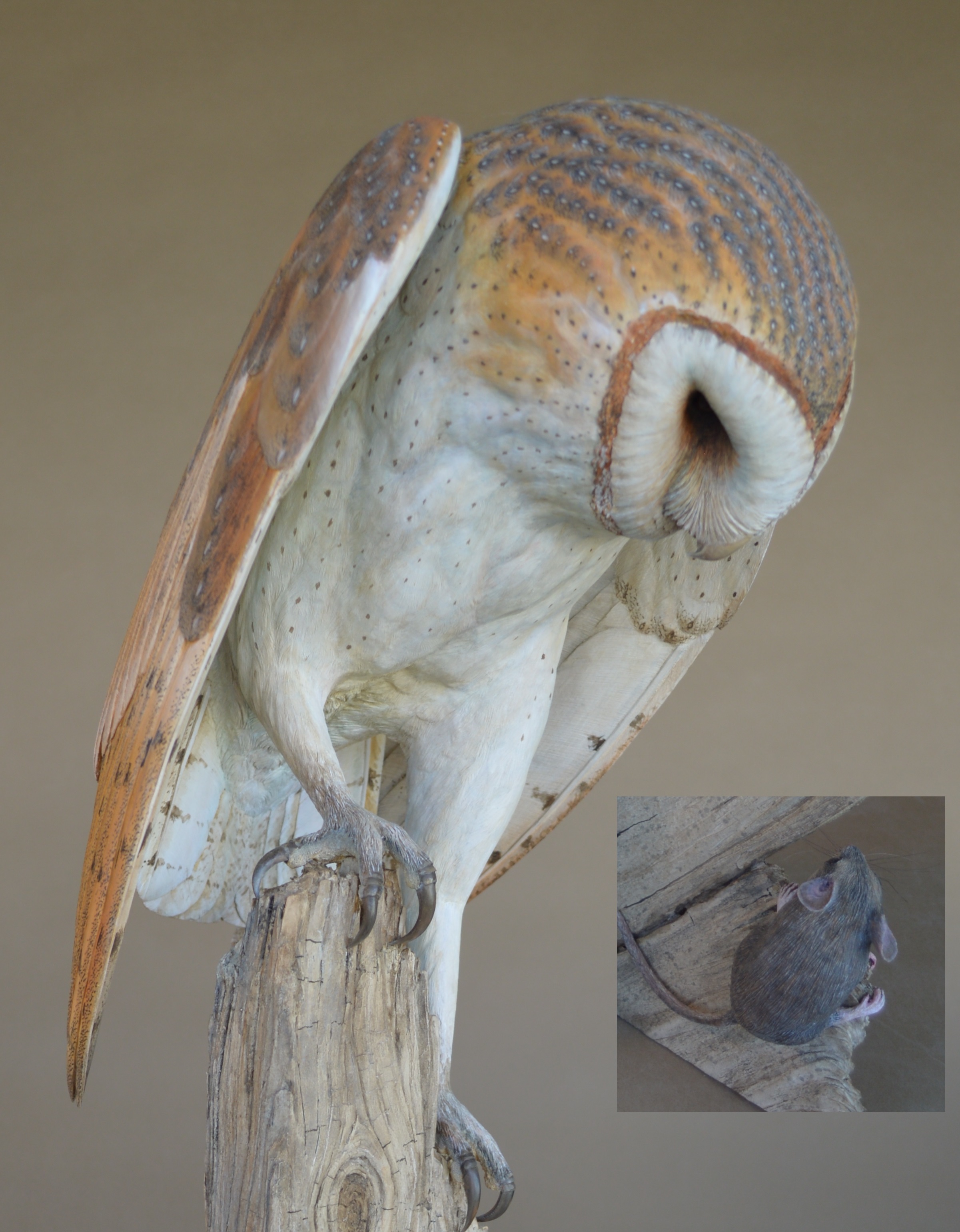 The Barn Owl with white footed deer mouse shown left was selected for the 2015 edition of Woodson Art Museum Birds in Art Exhibition. Left is a close up showing detail.

This Barn Owl won the Gulf South Championship for 2016 and the Hawk Owl took second place to the Barn Owl. This is the 7th time Dick has taken the purchase award at the Gulf South. 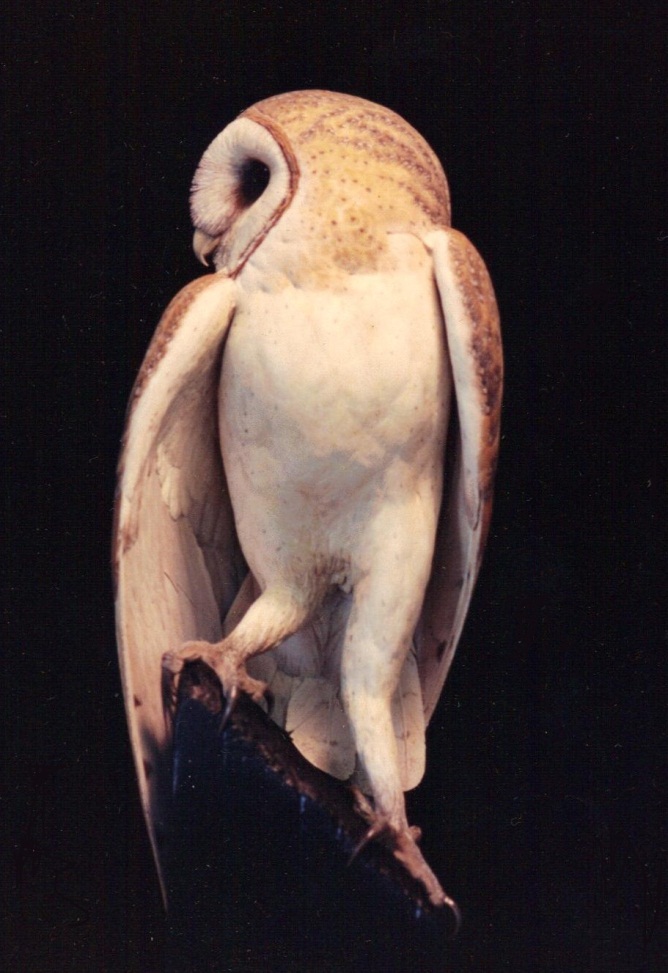 This Barn Own was selected to be exhibited in the annual Woodson Art Museum Birds in Art Exhibit in 1993 "...Throughout the years, Birds in Art has morphed and grown and now is recognized around the world as the exhibit that sets the standard for avian art." 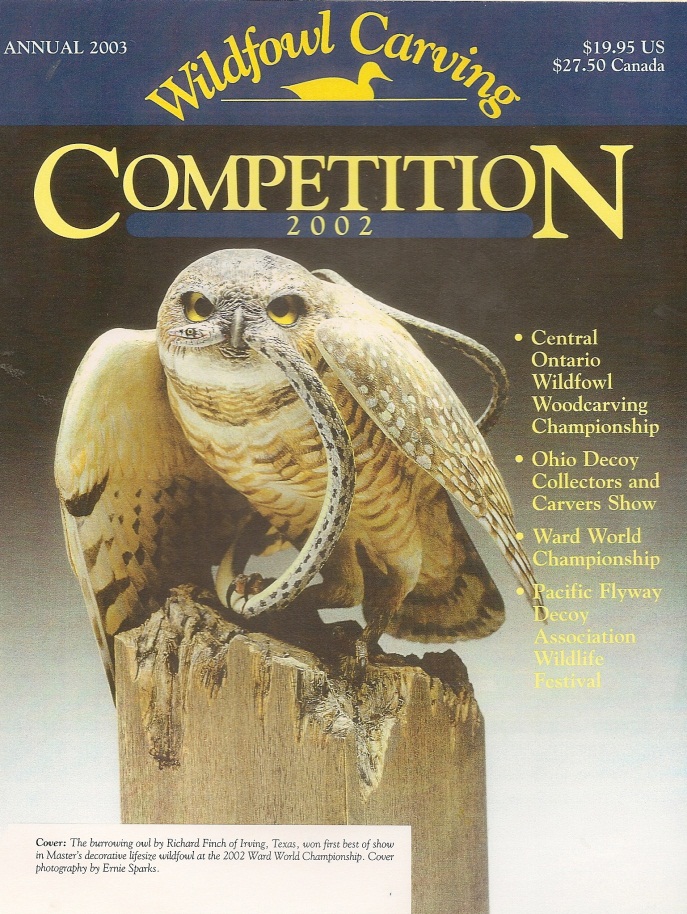 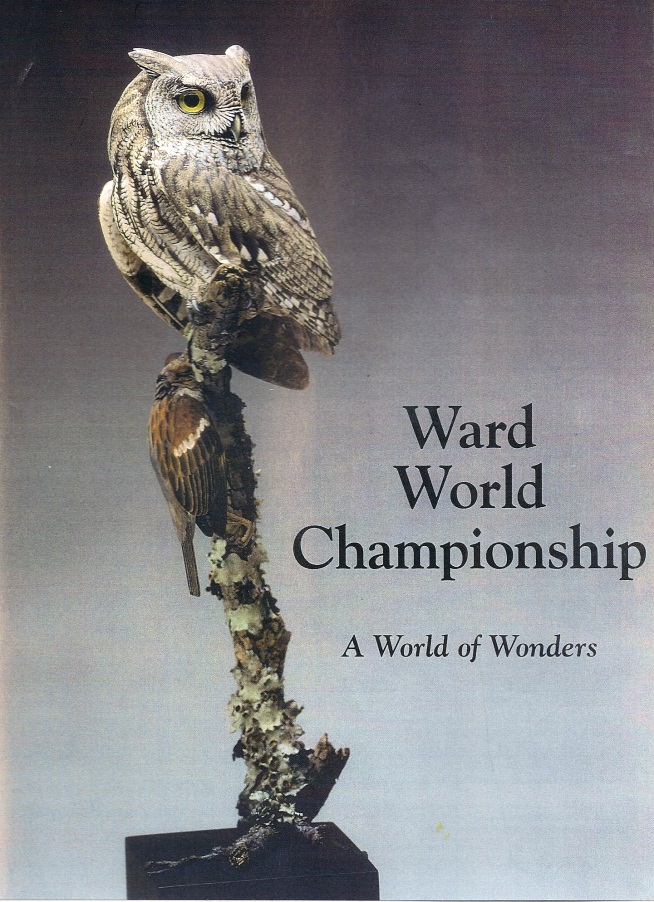 The Wildfowl Carving Competition magazine is published once yearly and it is quite an honor to have your work featured on the cover. Above left is Richard's Borrowing Owl on the 2002 cover. This piece also won the Gulf South Competition purchase award and is now in the Phillips Petroleum collection. He took top honors at the Gulf South Grand Prize six times. The Screech Owl with sparrow on the right placed third in the World competition at the Ward World Championship and was used as the spotlight piece in their magazine promotion.

The World Championship is an international event where carvers, collectors, and visitors convene at the end of each April in Ocean City, MD.  From highly decorative works of art to functional hunting decoys, more than 1200 different wildfowl carvings representing more than 150 species from around the world can be viewed at the premiere, most prestigious competition in the world.  Competitors of all levels--from youth to world champions--compete against their peers for the chance to win a portion of nearly $70,000 in prize money, as well as other recognition including ribbons, medallions, plaques and trophies. There are 39 different divisions in which an artist can compete--decorative life-size and miniature wildfowl, floating waterfowl, interpretive, gunning decoys and contemporary antiques to name a few. 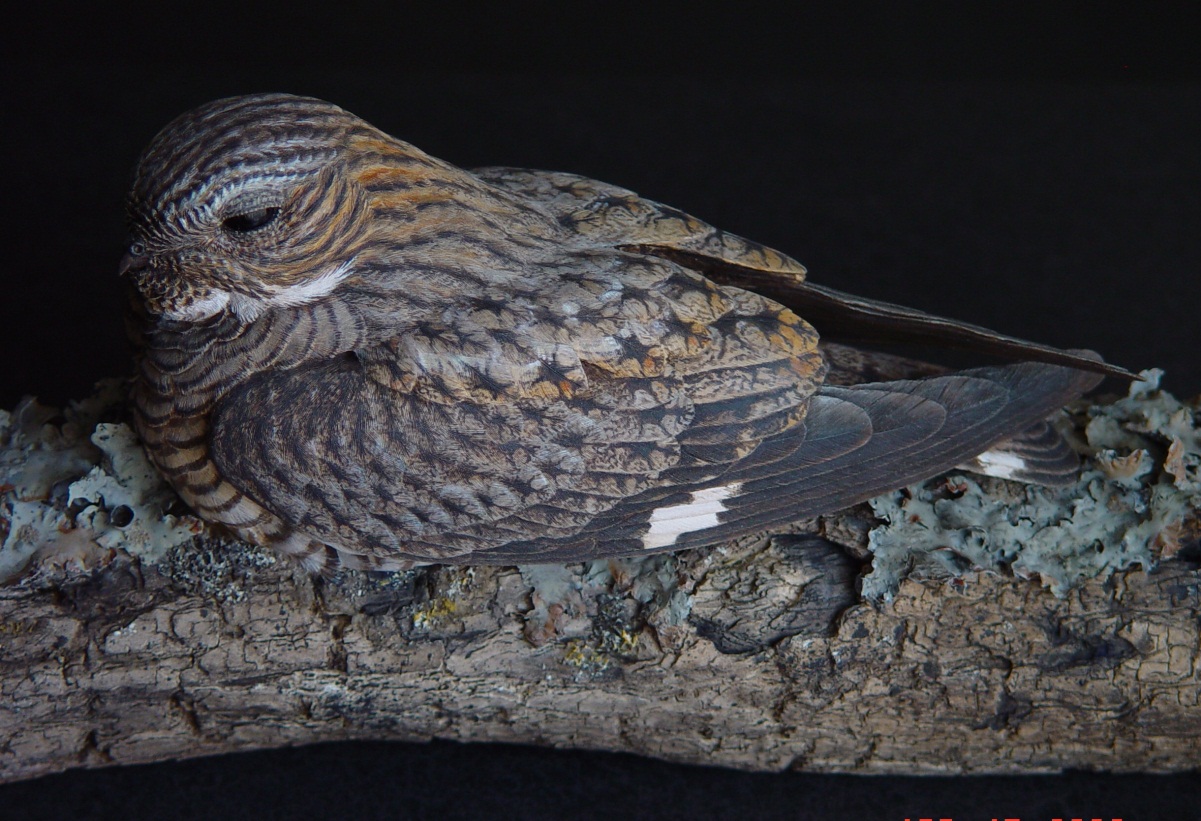 Common Nighthawk 2nd World Class at Ward Foundation also chosen for Birds in Art Exhibition. Those of you that are not familiar with this level of competition need to know that everything in the piece must be carved and molded including the habitat. The lichen and moss coverd log is completely hand made along with the bird. 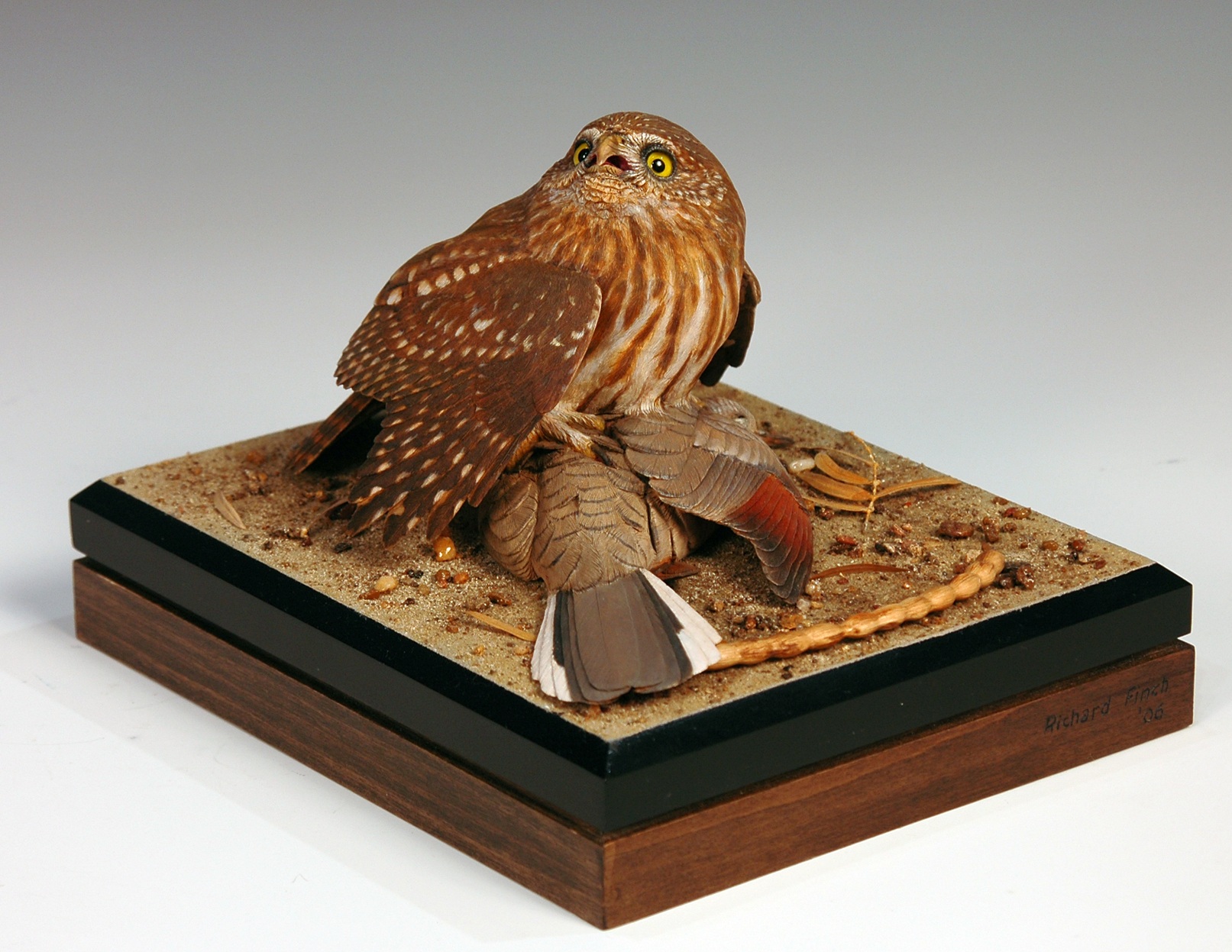 The World Show had in the beginning 4 levels of competition; Novice, Intermediate, and Open, and the World Level. In 2000 they set up one more level; Masters'. In order to compete in Masters' a carver had to have won a 1st, 2nd, 3rd in the World Level OR won two 1st Best of Show in Open, which is now called Advanced. Now there are five levels; Novice, Intermediate, Advanced, Masters', & World. 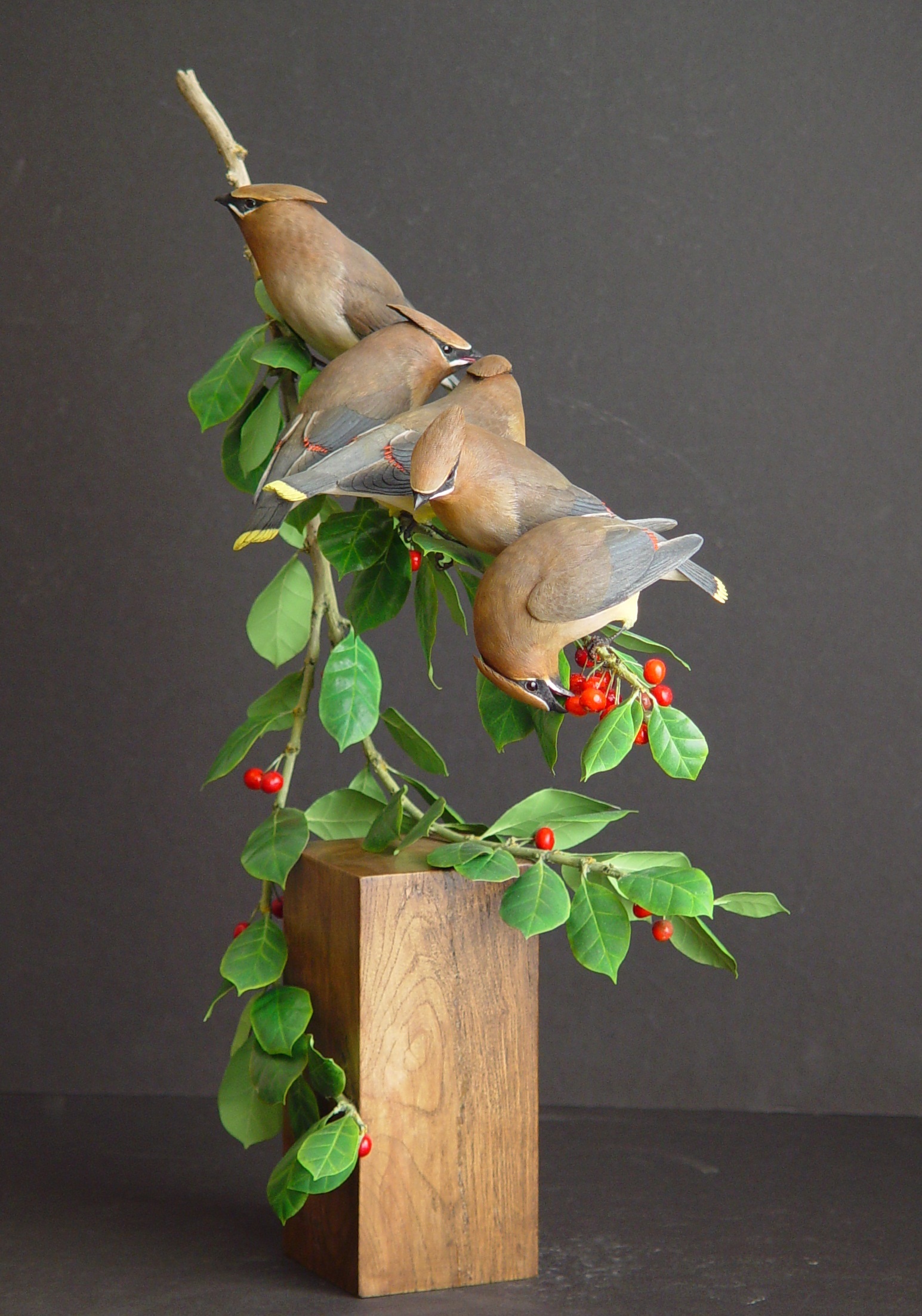 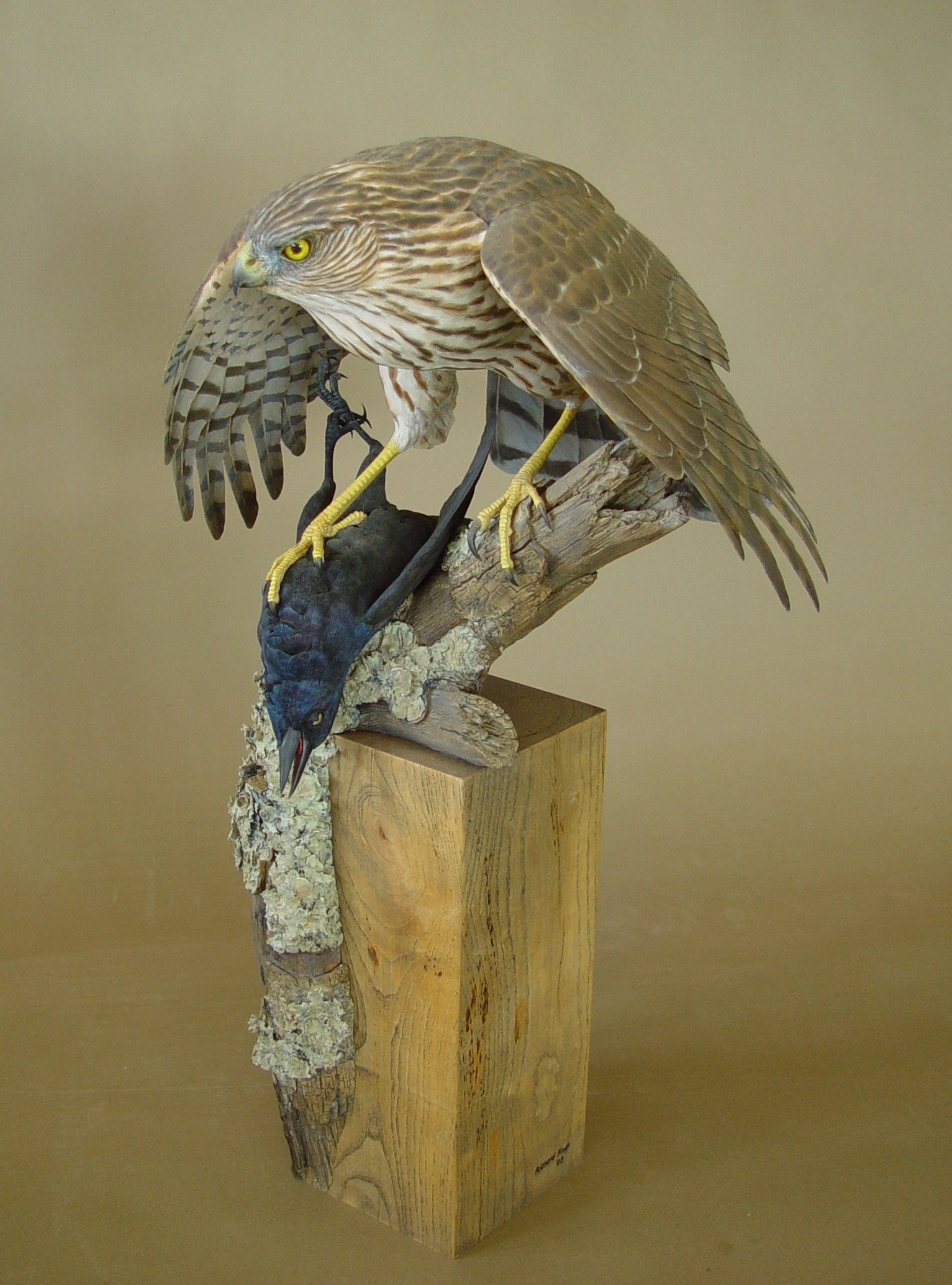 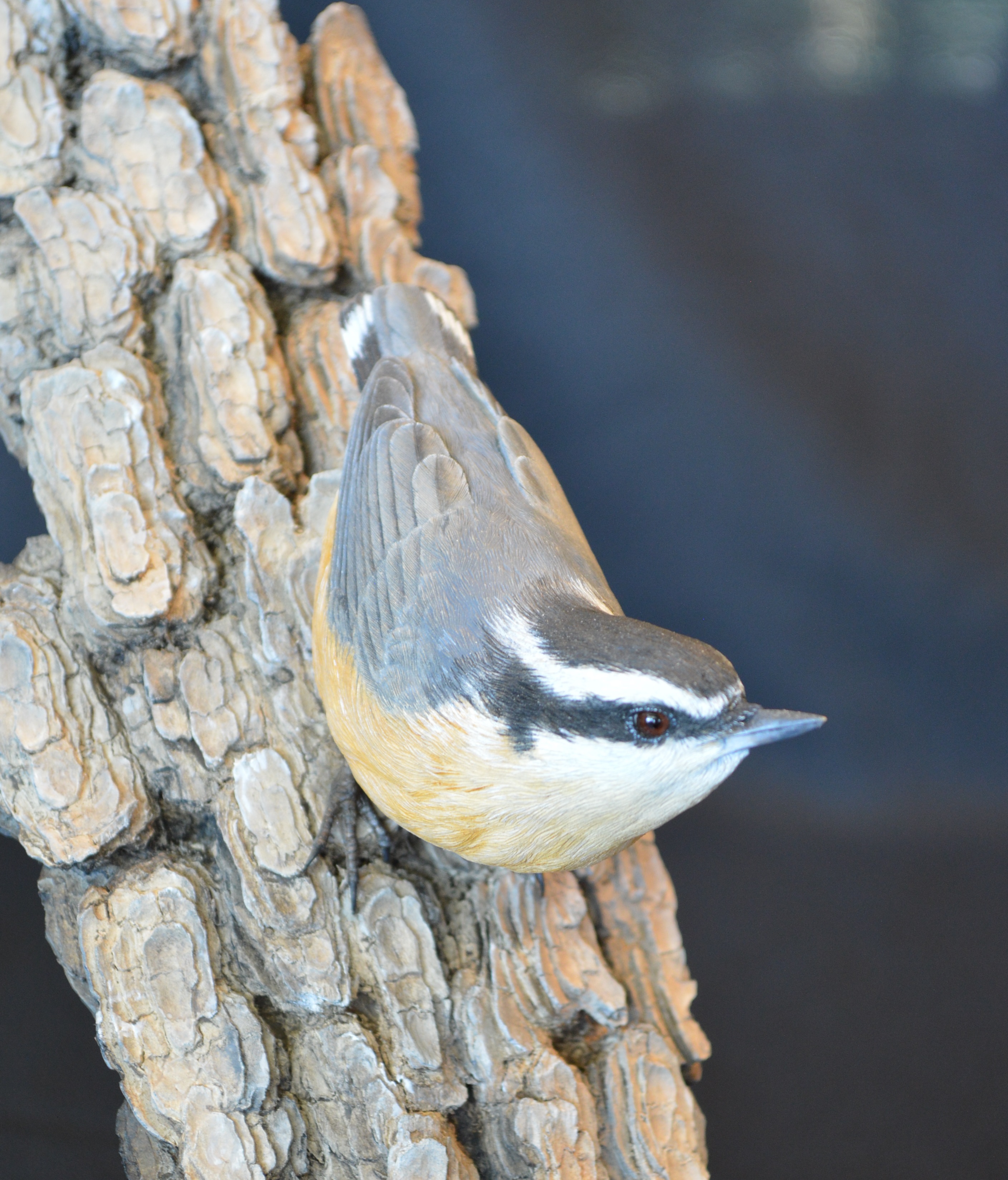 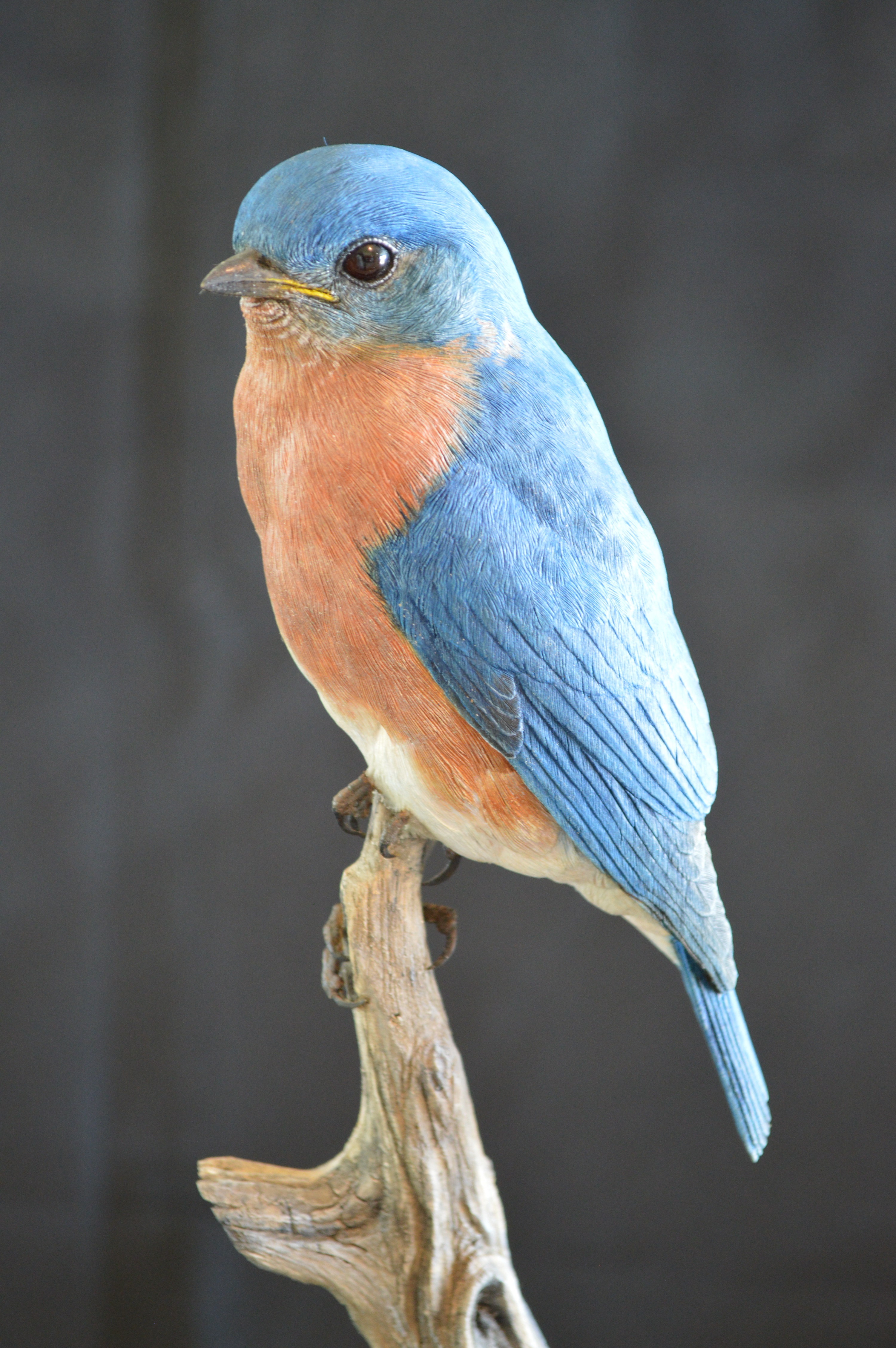 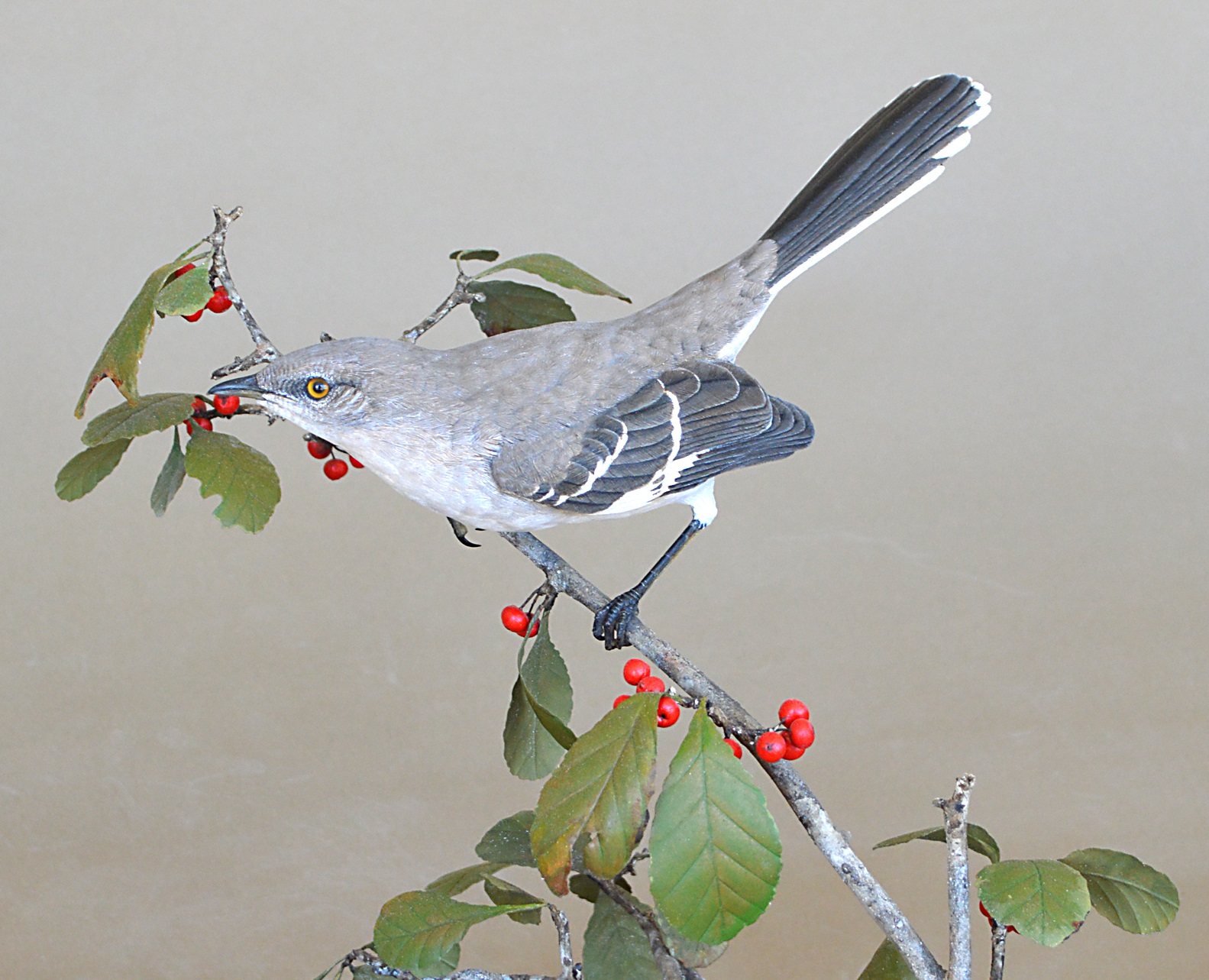 Above are a sampling of 2013 birds, some commissions and some for competition....from left: Red Breasted Nuthatch, Eastern Bluebird and Mockingbird. The Mockingbird took Best In Show in its division at the 2013 Gulf South Championship. Richard was the Featured Artist at the Easton Maryland exhibition 2013! In addition, his Mockingbird was selected for Leigh- Yawkey Woodson Museum's September 2014 Birds in Art Exhibit 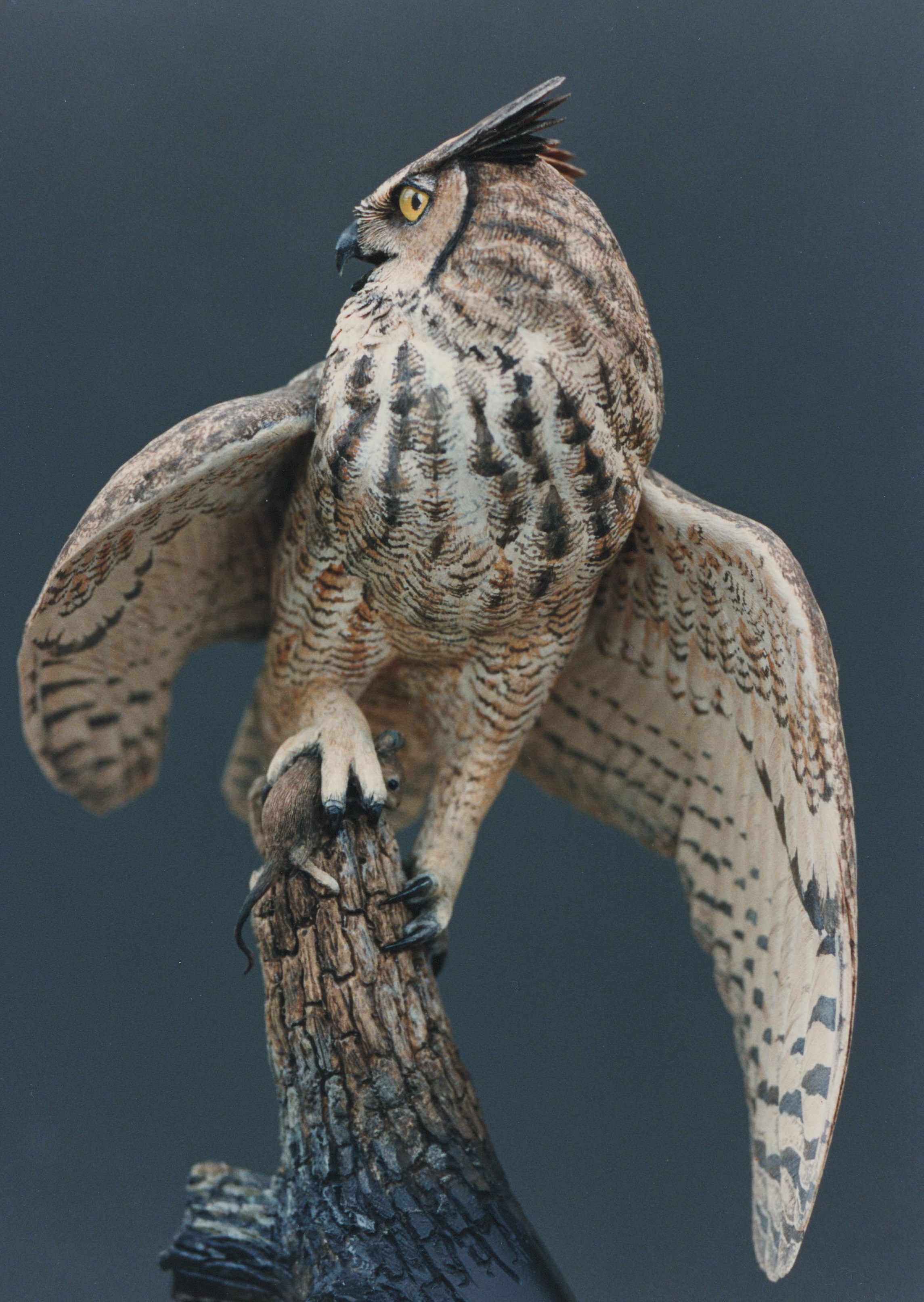 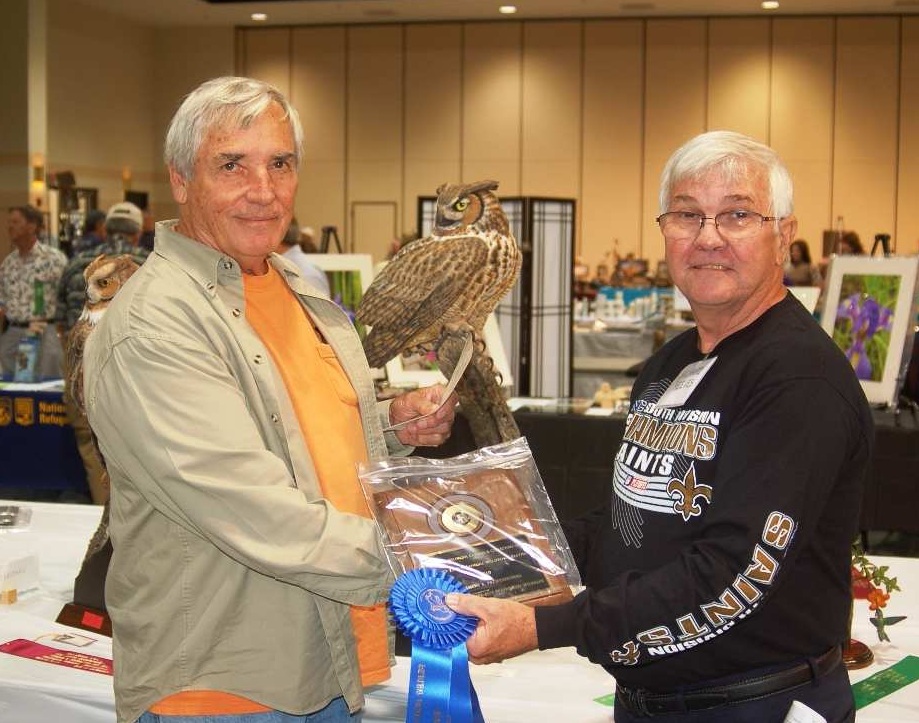 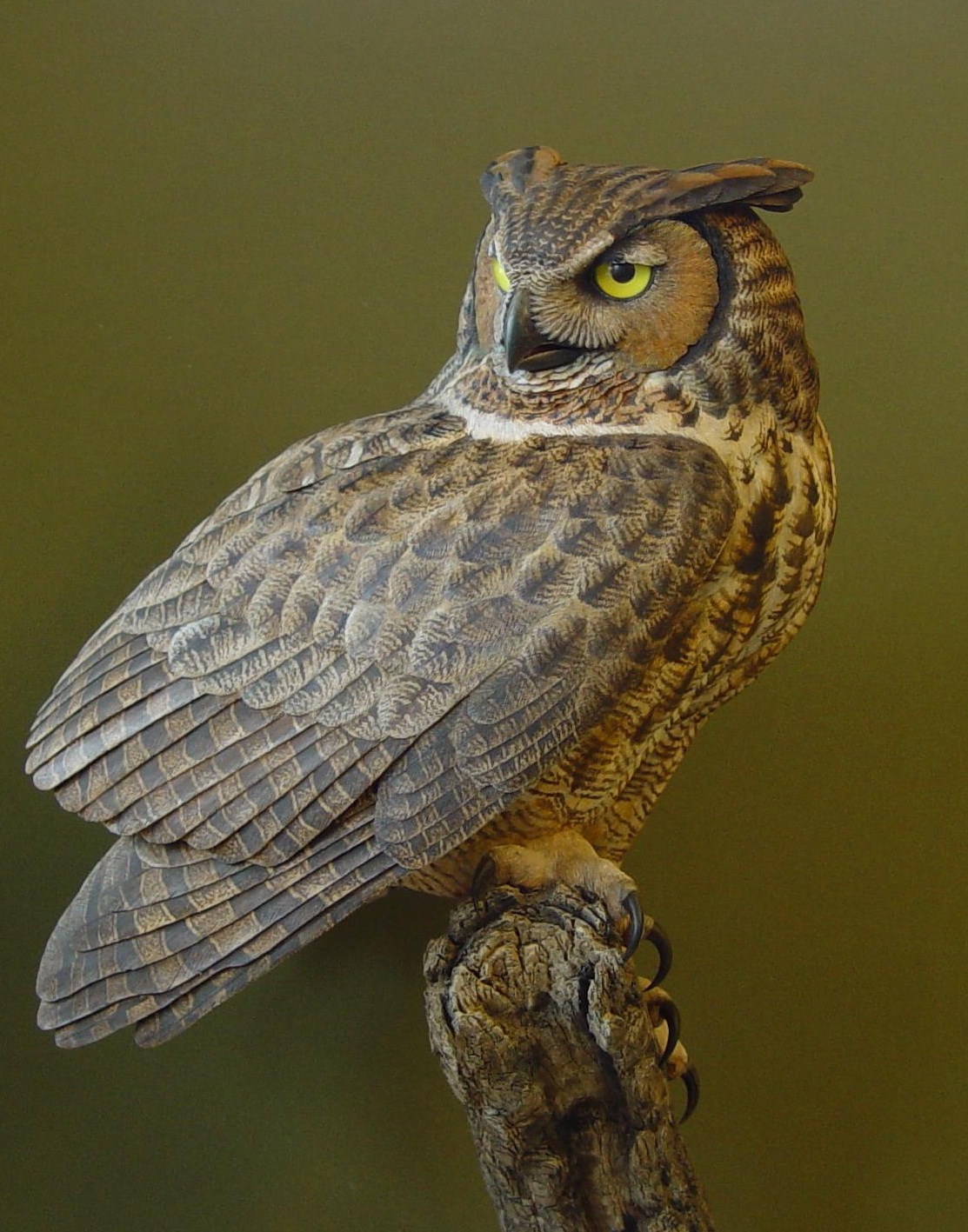 Richard Reeves presents to Richard Finch a Rosette First
Place Ribbon, a plaque and $14,000 Purchase Award from
Conoco Phillips for his carved owl.

The following was printed in "Attaction Magazine"

Waterfowl Festival attendees will be happy to learn that master carver Richard Finch has been named the Featured Carver of the 43rd annual Festival. Look for Richard and his wife, Jill, at the Chesapeake Carving Gallery at the Academy Art Museum. There he'll be exhibiting mostly life-sized bird carvings, such as the Short-eared Owl, Cooper's Hawk, and Blue Jays. Described as a simple man of few words, Richard, a mostly self-taught carver, loves to meet people at the Festival to discuss his work. He explains, “We get a chance to visit, not only with our carving friends, but patrons that stop by to say hello. The new visitors to the Festival are curious about what we do and how we do it. They ask very informed questions.” Richard has been exhibiting at the Festival since 2000. “Every now and then we find a good home for one of our pieces and that makes the weekend really worthwhile for us and the Festival,” added Richard, a Texas resident. Interestingly, Richard didn't start carving full time until about 16 years ago when he and Jill sold their business. “I was a brass die engraver in the DallasI/Forth Worth Metroplex for 31 years, sculpting brass dies for embossing paper for the graphic arts trade. My wife and I were self-employed. It seemed we galloped from deadline to deadline for all those years. Somehow, I became interested in bird carving 10 years before my wife would let me retire. Not until the last child was out of college did she say ‘okay,' Richard says.

“Sixteen years ago we sold the business, lock, stock and barrel and moved to our place in the country so I could carve full time. And that is what I do. I treat carving like a business and do it every day five days a week, probably at least 40 hours a week. The time flies. I carve what I want, when I want and feel no pressure to do more or go faster. When I hang it up in the evening, I can't wait to get after it again the next morning,” Richard adds. Richard has had a passion for birds since his youth. According to Jill, “Richard has been a bird watcher all his life. He was a birder when it wasn't cool.” Apparently he spent a lot of time in middle school sketching birds and motorcycles. Then, when he was in the military as a young man, he would be out on a patrol and rather than watch for incoming air attacks with his binoculars, he was looking for California Condors. Later, he attended San Antonio College and took every art class they offered. He worked in a bookbindery at the time in the department that made the dies to emboss the yearbook covers. Using that job experience, he traveled to California to train as a journeyman engraver before returning to Texas to start his own business Jill explains that while Richard is carving, he has a lot of time to daydream. “He takes every bird publication known to man and has tons of bird related books. When he gets interested in a bird that he isn't familiar with, we go find one.”

And Richard is serious about his research in a particular bird. For instance, he and Jill went to El Canelo Ranch in the Texas Valley to research the Ferruginous Pygmy Owl and attended a seminar, hoping the speaker would have one with him. He didn't and the lecture was about DNA. Jill summed that lecture up in three words: “It was torture.” Luckily, not all research assignments have been dull. They've traveled to Costa Rica and Ecuador as well as Arizona to study the Elf Owl and its habitat. Jill added, “Richard's favorite bird to carve is an owl...all owls.”

In the beginning of a project, he tries to get access to a specimen from the Museum of Nature and History in Dallas to photograph and take measurements. These specimens are just skins and a few bones but it is possible to extrapolate what the actual bird was like. Bird rehabilitation organizations are happy to facilitate a viewing of certain "patients." Richard says, "You can never have too much reference material." He then does a blueprint detailing the bird's measurements and makes a clay model because mistakes are easier to correct in clay. When Richard gets a rough idea of a pose and habitat, he starts in the wood. "So many birds; so little time,” Richard laments.

I am extremely proud of Dick's work. He was always a "bird brain" and I spent many hours trailing after him on birdwalks as a kid. In the 1980s Dick opened his on business carving brass dyes for the industrial arts. Handcraft Engraving was a successful business but over the years it became obvious that computer generated images would take over the market. By chance he and his wife Jill attended a Duck Stamp exhibit in a Dallas Gallery ; Collectors' Gallery . Dick said "Everything in there was geared to the sportsman, more or less. I don't even remember getting to the exhibit because I got sidetracked by a little quail on a base. On closer inspection, I realized it wasn't taxidermy". He corralled the gallery owner, Bubba Woods, and questioned him about the quail. "He proceeded to educate me on the art of bird carving, artists' names, and about the World Competition in Ocean City, MD". What a life changing event for Dick. He started carving birds as a hobby and it soon became evident that this was his calling. In the 90's he began carving and competing in many shows and in 1997 he sold his business and began carving wildfowl full time and his hobby morphed into a full time vocation and he became know as a world class carver and a competitor to be reckconed with.